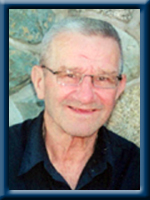 It is with great sadness that the family announce the passing of Dougald Thealo Bolivar, 82, of Buckfield, Queens County who succumbed to the late stages of dementia.

Born in Chelsea, he was a son of the late Livingstone and Mildred (Bolivar) Bolivar of Bridgewater.

Dougald started his career in various accounting positions and then decided that suits were not in his future and chose work clothes, a hard hat and a pair of Greb boots. He worked many years as Superintendent of Construction for Mosher and Rawding. Once he retired from this company, he worked with his son, Brian, a general contractor, for a brief time. He then went to Bowater Mersey Paper as Assistant Superintendent of Millwrights until his second retirement. He completed two further consulting jobs for Bowater’s before his third and final “retirement”. Dougald never truly retired and continued to work tirelessly helping others when in need.

He was passionate about his family and assisting others, never seeking anything in return.

He is predeceased by his sisters, Sylvia Wile, Fayette (Joudrey) and her husband, John “Sonny”; and brother, Temple and his wife Kaye (Manthorne).

Visitation will be from 7-9 pm on Tuesday April 22nd, 2014 in Chandler’s Funeral Chapel, Liverpool. Funeral service will be held on Wednesday April 23rd, 2014 at 2;00 p.m. from Greenfield United Baptist Church. Reverend John Kaulback officiating. Internment will be in Pine Rest Cemetery, Greenfield. In lieu of flowers, donations may be made to the Greenfield United Baptist Church or Long Lake Youth Camp in Waterloo, Queens Co. Online condolences can be at made at www.chandlersfuneral.com

Offer Condolence for the family of Bolivar; Dougald Thealo