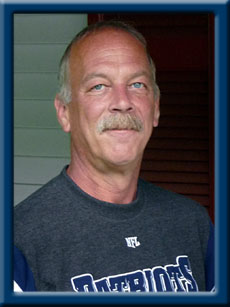 Bolivar, Allen A. 57, of Greenfield, Queens County, passed away peacefully in Queens General Hospital on October 31, 2017, with family at his side.
Allen was born in Arlington, Massachusetts on September 2, 1960 to Janice A. (Sousa) (Bolivar) Bauch of Hinesburg, Vermont and the late Freeman Aubrey Bolivar.
Allen moved to Canada with his father at the age of seven, to reside with his father at the family home in Buckfield – a child’s paradise, with woods and fields to explore. He looked forward eagerly to summer visits from his sister Sandy, and visits to the States to visit family there. Allen had a special relationship with his cousin, Andrew Freeman. They were more like brothers and continued their close relationship their entire lives. When they were young boys , you could see them tearing around Greenfield and Buckfield in the winter on their ski-doos. Allen was a man who loved his solitude. He was very happy when at his camp in the woods, with his dogs and nature. He was an avid collector of “things” and spent many a joyful hour at Frenchie’s collecting anything related to his favorite sports teams – all things Boston and New England. He loved watches and has an interesting collection of old radios. He loved hunting with his dogs and anytime spent in the outdoors. Allen loved family gatherings, and a good family feast. His quiet smile while watching his nieces and nephews was a sign of great pleasure in his family. He had a wide circle of friends and his friendship will be missed.
Besides his mother, Allen is survived by his sister Sandy (Marc) Bolivar-Adams, nephews Matthew and Chris, nieces Sophia and Thu; his brother/cousin Andrew Freeman; step sister Elizabeth (James) Fraelic, niece Leanne Hanley, nephew Scott Fraelic; step-brother Bill (Heather) Wharton, niece Angela Ross, nephew Will Wharton, several grand nieces and nephews. Last, but not least, his faithful companion, his dog Lily.
He was predeceased by his father, Freeman Bolivar, his step mother Shirley, his grandparents
Aubrey and Dorothy Bolivar and his aunt Estelle Freeman.
Cremation has taken place under the direction of Chandlers’ Funeral Home, Liverpool. A private graveside committal service will be held in Pine Rest Cemetery, Greenfield at a later date. No flowers. If you wish, a donation would be gratefully accepted to the SHAID animal shelter in Allen’s memory. Online condolences may be made to www.chandlersfuneral.com.
The family would like to express their gratitude to Dr. Tim Woodford for his compassionate and excellent care during Allen’s illness. Also, a deep thank you is extended to the nursing staff at Queens General Hospital who provided exemplary care to Allen over the past days.

Offer Condolence for the family of Bolivar; Allen Aubrey