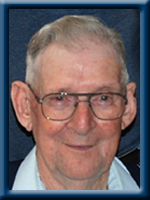 BOLAND – Harley Gordon, 84, of Bangs Falls, Queens County, passed away June 1st, 2011 in Queens General Hospital, Liverpool after a short battle with cancer.
Harley was born June 18, 1926 in Bangs Falls and was a son of the late Roger K. and Hazel A. (Layboldt) Boland.
Harley had a strong work ethic that a little hard work never hurt anyone and that if you couldn’t afford it outright, you didn’t need it. He worked hard all his life to provide for his wife Mary and their children. Over the years he worked in the woods , with Mosher and Rawding and finally as a grader/snow plow operator for the Nova Scotia Department of Transportation and later became a school bus driver from which he retired. He fell in love with his sweetheart Mary and walked to Molega regularly to see her. In 1945, they married and soon after, moved to Bangs Falls. In that same year he tried to enlist in the military, but was rejected for medical reasons. When his parents moved to Mersey Point, he was left the family homestead which he kept mowed so it wouldn’t grow all up in trees. Harley enjoyed the outdoors and in his earlier years was an avid salmon fisherman and hunter as well as maintaining the family homestead raising cattle, pigs, chickens and every year planted a successful garden He always seemed to have a Ford truck and treated it like a baby being very particular who drove it. He had many good friends and loved nothing better than a visit with family and friends. Harley taught himself how to play the guitar and mandolin and it was common for him to sit and play and sing when company came. Harley thoroughly enjoyed his grandchildren, each and every one of them. Although he may not have been the type of person to express it, it was obvious that he loved and cared for them in his own way. When they all grew up and moved away, he even expressed that he missed them and that things weren’t the same. However, he was fortunate to have lived and got to know somewhat all eight of his great grandchildren, and so his memory will live on with them. He may be gone, but will be fondly remembered by all who knew him.
He is survived by his wife of 65 years Mary (Sutherland); daughter Virginia (Peter) Stafford of Red Deer, AB; daughter-in-law Linda Boland-Uhlman of Bangs Falls. Grandchildren Sherri (Rudy) Hebrang of Bangs Falls; Nicole (John) Cross of Wilmot, NS; Stephanie (Corey) Tracy of Toronto, ON; Justin (Kelly) Stafford of Red Deer, AB. Eight great-grandchildren all who affectionately knew him as “Bumpy”. Sister Jean (Clyde) Uhlman of Chelsea. Brother Linkard (Elizabeth) of Mersey Point.
He was predeceased by his son James; sisters Belva Brown and Ruth Walsh and brother Grover.
Cremation has taken place under the direction of Chandlers’ Funeral Home, Liverpool A graveside funeral service will be held Monday, June 6th, 2011 at 11:00 a.m. in South Brookfield Community Cemetery. Family flowers only, donations may be made to Heart and Stroke Foundation of Nova Scotia or the Canadian Cancer Society. Online condolences may be made to www.chandlersfuneral.com

Offer Condolence for the family of Boland; Harley Gordon