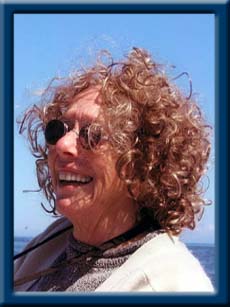 Dr. June Caryll Blewett, born in Chicago in 1932, passed away on 2 May 2017 in Liverpool, Nova Scotia, with her beloved Rita Howell at her side. She was predeceased by her husbands Robert Cosbey and Dr. Duncan Blewett. She leaves behind two sons, Aaron Cosbey (Jackie) and Timothy Cosbey (Virginia ), two stepchildren, Mary Blewett-Lowe and John Blewett, and grandchildren Aven June, Cameron and David.

June grew up in Chicago where she married Robert Cosbey and they were very active politically. June was very proud to have marched with Dr. Martin Luther King in Selma, Alabama. She moved to Canada and settled in Regina, where she obtained a Ph. D. in psychology and where she married Duncan. She spent many happy summers in northern Saskatchewan and also went to California where she studied under Fritz Perl.

She lived for many years on Gabriola Island, British Columbia and 40 years ago built the first of four houses on Isla Mujeres, Mexico, where she loved to spend her winters. In 2007 she moved to Port Medway, N.S. to spend the last chapter of her life.

In the relatively short time that she lived in Nova Scotia June made a huge impression on people and established many close friends. She was a mother, lover, psychologist, teacher and mentor. She had an avid interest in politics, literature, design, art, architecture, social issues, her dog Sugar, gardens – the list goes on and on. She stood out in any crowd because of her intelligence and sartorial elegance, and her calm demeanour belied her love of lively discussions that challenged conventional thinking. Above all, June loved people and people loved June. She will be sorely missed but leaves us with many happy and lasting memories. If so desired, charitable donations can be made in her name to a charity of your choice.

Offer Condolence for the family of Blewett; Dr. June Caryll