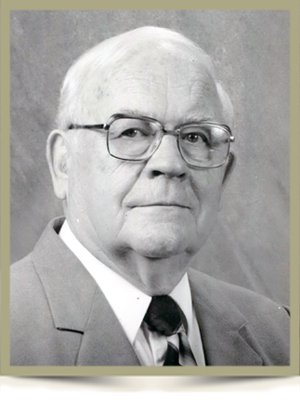 In 1920 the family returned to Nova Scotia, where Borden spent his early years in Mulgrave, Sambro and Brooklyn (Queens County), according to his father’s pastoral charges.  After attending high school in Liverpool, he graduated from Mount Allison University in pre-med in 1936 and received his M.D. degree from Dalhousie University in 1941.  During World War II, Borden was commissioned a captain in the Royal Canadian Medical Corps and worked in Halifax attending thousands of wounded arriving back to “an east coast port”.  He also accompanied the troop trains shuttling wounded inland to Ottawa.   After the war, Borden returned to Liverpool to establish a busy general practice, and from 1949-1985 was a member of the active staff of Queen’s General Hospital as anaesthetist.

Borden was a founding member of the Liverpool Flying Club and a prime mover in the development of the Liverpool Airport in Greenfield.  As the Civil Aviation medical examiner he felt he should learn to fly to better to understand the problems experienced by pilots.  He qualified as a private pilot in 1974.  He also became a member of the Canadian Society of Aero-Space Medicine, and was an Honourary Life Member of the St John Ambulance Association.  He retained his army reserve commission as a major and was an active member of the 133rd Battery, 14th Field Regiment of the Royal Canadian Artillery in Liverpool until its dissolution.

Besides his parents, Borden was predeceased by his first wife, L. Claire (Nickerson), whom he had married in 1942, and his brother, H. Arthur Bird.

Cremation has taken place.  A memorial service will be held on Friday April 17th at 2 p.m. at Zion United Church, Liverpool, under the direction of Chandler’s Funeral Service, Ltd.  In lieu of flowers, donations in Borden’s memory may be made to the Queens County branch of the Nova Scotia Museum, Zion United Church, Liverpool, or a charity of one’s choice.  Dr. Bird was extremely well-liked by many people.  To the end of his days he maintained an alert, questing mind, and although he had several hobbies, (flying, photography, fishing, gardening, travel,) his love of people was his life-long occupation and passion.  Rest in peace, Dad.

Online condolences may be made to the family at www.chandlersfuneral.com

Offer Condolence for the family of Bird; Stephen Borden