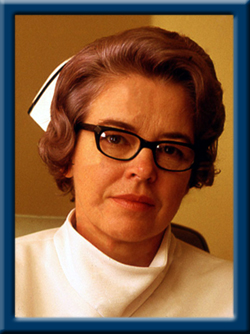 Age 92, passed away January 7, 2016 at South Shore Regional Hospital, Bridgewater.
Born in Goffs, NS, this self-professed “farm girl” was pre-deceased by her parents, James and Ida Ledwidge; brothers, Emery, Tim and Laurie Ledwidge; first husband, Earle A. Richard; second husband, Dr. S. Borden Bird; and grandson, Sean R. Marks.
She is survived by her sister, Marina Drummond; son, Wayne (Debbie) Richard; daughter, Lorna Marks; grandsons, Chris, Greg and Justin Richard; granddaughter, Christa Marks; stepchildren, John and Carolyn Bird; and many nieces and nephews.
Trained as a nurse during the war years, she was proud of becoming an RN. Blessed with natural leadership abilities, she held various positions in organizations throughout the years, one of which was president of her graduating class at the Halifax Infirmary (1944). Being a quilter showcased her creative abilities, and she enjoyed lifetime membership in the Queens Quilters. She will be remembered by many as Head Nurse of Obstetrics at Queens General Hospital. Her kind, calming demeanor influenced many new mothers as they brought their babies into the world. Known for her practical wisdom, she never “suffered a fool gladly”. She always said that she had loved and been loved—what more was there than that. She enjoyed a “life well-lived” and will be sadly missed.
Muriel’s devotion to life and empathy for others may be remembered by donations in her memory to a charity of one’s choice. Chandlers’ Funeral Service Ltd. of Liverpool has been entrusted with funeral arrangements, and cremation has taken place. A Celebration of Life will take place at 2:00 p.m. Saturday, May 21st, 2016 at the Trinity Anglican Church, Liverpool. On-line condolences may be shared at www.chandlersfuneral.com.