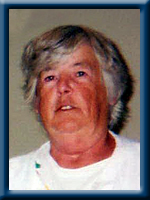 BENHAM – Thelma Viola, 67, of Milton, Queens County, passed away peacefully in Queens General Hospital, Liverpool on Saturday, January 17, 2015.
Born in Halifax, she was a daughter of the late Robert “Bob” and Shirley (MacDonald) Burgess.
She is survived by her daughter Sheila (Gary) of Liverpool, her son Charles (Wendy) of Bedford, grandchildren Robert Benham, Rose Ann Oickle and Emily Benham, great grandchildren Lilly Oickle, Jadis, Adden and Olivia Leopold. Her sisters Sylvia (Fred) Sanford of Belmont, Linda (Victor) Frotten of Quinan. Her brothers Kenneth (Judy) of Bedford, brother-in-law Michael (Doreen) Hartt of Mount Uniacke.
She was predeceased by her husband Charles, sisters Vera Harding, Kathleen “Kay” Hartt and brother Robert.
Cremation has taken place under the direction of Chandlers’ Funeral Home, Liverpool. A private family graveside memorial will be held at a later date. No flowers by request. Donations may be made to the Nova Scotia Lung Association. Online condolences may be made to www.chandlersfuneral.com

Offer Condolence for the family of Benham; Thelma Viola