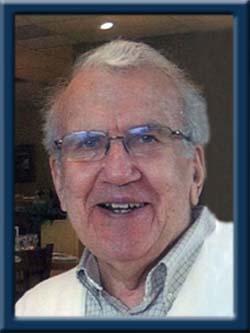 Born in Sherbrooke, Quebec, he was the son of the late William and Annie (Beaton) Bell.

Bob was employed for 45 years at the Bell Telephone Company in Quebec. After retiring he went to work in the funeral industry, first at Cass Funeral Home in Sherbrooke, Quebec and then at Harris Funeral Home in London, Ontario. He was a life member of the Sherbrooke Snow Shoe Club and was a member of the Free Masons, receiving his fifty year jewel. Bob enjoyed stamp collecting and listening to Stuart McLean on the radio. Above all else, Bob was most passionate about his family and spending time with them.

He was predeceased by his loving wife, Gwendolyn; sister, Shirley.

Cremation has taken place under the direction of Chandlers’ Funeral Home, Liverpool. A private family service will be held at a later date. No flowers by request, donations may be made to Lingwick Cemetery, Gould, Quebec or to the Queens Manor Day Program, Liverpool, Nova Scotia. To share memories or condolences, please visit www.chandlersfuneral.com

Offer Condolence for the family of Bell; Robert “Bob” Gerald