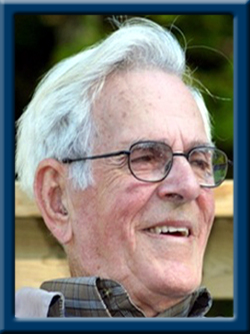 It is with great sadness that the family of Frank Graham Bell, aged 88, of Liverpool, N.S., announce his death on Wednesday, January 13, 2016. Born on January 7, 1928, in Caledonia, N.S., he was the youngest child of the late Charles Samuel Alexander and Abbey Hazel (Wolfe) Bell. He was predeceased by his loving wife of 54 years Georgina Mae (Hines) in 2009. He was the last surviving member of his immediate family, predeceased by siblings Arnold (Eileen), Wendell (in childhood), Ivis (Donald Nickerson), and Arthur (Joan, Norma).

At age 16 he left home to attend Bridgewater High School and following graduation attended Acadia University where he received both a BA and a BSc (Honours) in Chemistry. He graduated from Dalhousie University Medical School in 1955. In 1957, after interning and working briefly in Halifax, he moved to Liverpool where he practiced Family Medicine until his retirement in 1992. He loved Family Medicine and among his favorite patients were children, and they could always count on a green candy or a piece of “Juicy Fruit” gum following their office visit.

Frank loved many sports, and in his younger years, he loved to play baseball. He was an avid bridge player, a passion he cultivated at Acadia. Together Frank and Georgie enjoyed curling and golf. They also loved to travel, including annual family holidays, trips to Europe with friends and family, and making their annual retreat to Florida to escape the cold winters on the South Shore. He loved spending time with his family and grandchildren at “The Camp” in Greenfield.

Frank was a preceptor in Family Medicine for Dalhousie Medical School for many years, a role he enjoyed immensely, exposing students to the role of a family doctor in a small community. He valued education and established the Bell Family Scholarship at Acadia to support a graduate from the Liverpool area in post-secondary education. He was on the board of Maritime Medical. He was an elder of Zion United Church, and a longstanding member of the Liverpool Curling Club and Liverpool Golf Club and a strong supporter of community events.

Frank was a wonderful husband, father and grandfather. A man of few words, he was generous and caring. He was a voracious reader and followed current events closely. In his later years he illustrated a remarkable ability to adjust and tolerate social change although he usually had an opinion on it.

Frank is survived by his three children: Pat (John Miller), David (Diane), and Joanne (Jeff Redden), and seven grandchildren: Doug and Kate Miller, Lauren, Erin and Bryan Bell, and Jill and Drew Redden, as well as many nieces and nephews.

Cremation has taken place under the direction of Chandlers’ Funeral Home, Liverpool where visitation will be held Sunday, January 17, 2016 from 1:00 until 2:00 and funeral service will be at 2;00 p.m. Reverend Carol Smith officiating. Reception to follow. Burial will take place at a later date.To share memories or condolences, please visit www.chandlersfuneral.com

The family extends their sincere thanks for the kindness and care offered by the physicians and nursing staff on Ward 8.2 at the Halifax Infirmary. In lieu of flowers, the family suggests a donation to Queens General Hospital Foundation or the Greenfield Fire Department.

Offer Condolence for the family of Bell; Frank Graham