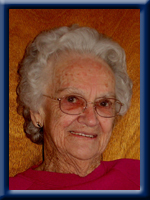 Born in Brooklyn, she was a daughter of the late Eldridge and Nina (Fralic) Jennings.

Hilda was a former member of  Pilgrim United Church, Brooklyn, the UCW and the Rebekah’s Lodge, Liverpool. She enjoyed gardening and knitting.

She was predeceased by her husband Spencer and sister Thelma.

Funeral service will be Tuesday, March 9th, 2010 at 2:00 p.m. from Chandlers’ Funeral Chapel, Liverpool. Peter Anthony officiating. Burial will be in Seaside Cemetery, Brooklyn. Family flowers only, donations may be made to Pilgrim United Church or to any charity. Online condolences may be made to www.chandlersfuneral.com

Offer Condolence for the family of Beck; Hilda Elizabeth