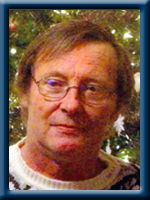 BECK – Clarence Kenneth, 63, of Milton, Queens County, passed away peacefully in Queens General Hospital, Liverpool on Tuesday, January 20, 2015.
Born in Liverpool, he was a son of Evelyn L. (Patterson) Beck of Milton and the late H. Otis Beck.
Ken was a former Michelin employee working on the wire side of production retiring after 30 years service. He liked to go for drives, “supervising” road construction, going for walks on the beach with Howie and doing Sudoku and jigsaw puzzles.
Surviving besides his mother are his daughters Kimberly (Todd) McLeod of Liverpool, Shawna Beck (Anton Snarby) of Milton, grandchildren Spencer McLeod and Amelia Snarby, sister Leanne Inness (Raye Eisnor) of Liverpool, niece Kelly Inness (Wayne Silver) of Bedford.
He was predeceased by his wife Cheryl (Chisholm).
Cremation has taken place under the direction of Chandlers’ Funeral Home, Liverpool, where visitation will be held Sunday, January 25, 2015 from 7 until 9 p.m.. A graveside memorial service will be Monday, January 26, 2015 at 11:00 a.m. in Zion United Cemetery, Payzant Street, Liverpool. Reverend Judy Cross officiating. No flowers by request, donations may be made to the Canadian Cancer Society. Online condolences may be made to www.chandlersfuneral.com

Offer Condolence for the family of Beck; Clarence Kenneth