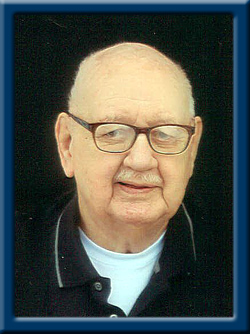 BARON – Raymond Clifford, 92, of Brooklyn, Queens County, passed away peacefully in Valley Regional Hospital, Kentville on Saturday, October 15, 2016.
Born in Montreal, PQ, he was a son of the late John and Mamie (Astley) Baron.
Ray served with the RCNVR during World War Two as a stoker and as a gunner. He was a corporal in the Army Reserves for six years. Following the war, he worked for Bowater Mersey Paper Company Limited retiring after 34 and a half years as a paper maker. He served as President of Local 259 International Papermakers Union for 14 years. He was a coach and an umpire with the Brooklyn Softball League in his early years. He was a member of Mersey Branch #38 Royal Canadian Legion Liverpool where he served on the executive and was instrumental in starting “Friday Night Fever”. He was also instrumental in bringing to Brooklyn the Centennial Project in 1967.
He is survived by his daughter Linda (Jeff) Dunham of Kentville, his son John (Wanda) of Charleston. Grandchildren Tracy (Brenden) Baker and John Baron (Stacey Killoh) and great grandchildren Kelcie and Kaelee Baker, Kiana Baron. His step daughters Linda (Fred) Balcolm of ON; Beverley (Bill) Matheson of Dartmouth and step sons Ernie McKinnon of Bridgewater; Brian (Brenda) McKinnon of Brooklyn; Jeffrey (Hannah) McKinnon of Beach Meadows. Several step grandchildren and step great grandchildren and his loving companion Louise VanNorden.
Ray was predeceased by his first wife Pauline (Kelly) and his second wife Violet (Colp)(McKinnon). Brother Leonard and step daughter Sandra Wamboldt.
Cremation has taken place under the direction of Chandlers’ Funeral Home, Liverpool where visitation will be Wednesday evening (October 19, 2016) from 7 until 9 p.m. with a legion memorial service being held at 7:00 p.m.. Funeral service will be Thursday, October 20, 2016 at 2:00 p.m. in Chandlers’ Funeral Chapel, Liverpool. Lay Minister Peter Anthony officiating. Reception to follow. A private family interment will be at a later time. Family flowers only, donations may be made to the Canadian Cancer Society, Mersey Branch #38, Royal Canadian Legion, Liverpool or to a charity of your choice. Online condolences may be made to www.chandlersfuneral.com

Offer Condolence for the family of Baron; Raymond Clifford