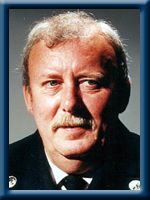 BALL – Gerald Aulton “Gerry”. 1937 – 2015. It is with broken hearts that we announce Gerald’s sudden passing at Queens General Hospital on Sunday, January 18, 2015.
Born on March 21, 1937, in Townsite, Queens County, he was a son of the late Frank and Esther (Whynot) Ball.
Gerald retired from the Nova Scotia Power Corporation after 28 years of service. Gerald worked tirelessly all his life for his community. He was an active 50 year charter member of the Liverpool Lions Club. He served 38 years in the Liverpool Firefighters Association, retiring as Chief, was member of the Honourary Firefighters Association, a member of the Senior Citizens Group, and an affiliated member of the Liverpool Legion. CNIB was dear to his heart and he canvassed and did many things to aid the blind. He loved woodworking and spent many hours in his workshop.
He leaves to mourn his loss; wife Juanita (Sears); daughter Cathy of Lawrencetown; son Chris of Liverpool, grandson Tyler of Red Deer, AB., sister-in-law Ruth Ball and Aunt Verna Mac Dougall and many nieces, nephews and cousins.
He was predeceased by sisters Emma Morris, Valerie “Sally” Hebb and Esther “Nan” Williams; brothers Willard and Douglas.
Cremation has taken place under the direction of Chandlers’ Funeral Home, Liverpool where visitation will be Wednesday, January 21, 2105 from 7 until 9 p.m.. And a Lions Memorial Service will be held at 8.00 p.m.. Funeral service will be held Thursday, January 22, 2015 at 2:00 p.m. in Liverpool United Baptist Church. Reverend Dr. Steven Hopper officiating. Burial will be in Zion United Cemetery, Payzant Street, Liverpool. Family flowers only, donations may be made to a charity of your choice.. Online condolences may be made to www.chandlersfuneral.com

Offer Condolence for the family of Ball; Gerald “Gerry” Aulton