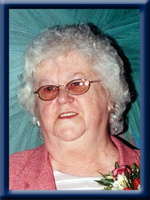 It is with great sadness that the family of Annie Elizabeth Backman, of Western Head, Queens County announce the passing of the “Heart of the Family” at the age of 85 in Harbourview Haven, Lunenburg.
Born in Buckfield, she was a daughter of the late Harry “Henry” and Elizabeth (Joudrey) Robar.
Annie greatest love was her family. It brightened her day when the grandchildren or great grandchildren came to visit. She was well known and loved for her baking such as molasses cookies and apple pies to name a few as well as her handy work with knitting and sewing. She always liked to keep busy.
She is survived by her daughters Susan (Gary) Smith of Whitby, ON., Elizabeth McCoy of Calgary, AB., Florence Berry (Frank Hubley) of Bridgewater, Cheryl (Sterling) Nickerson of White Point, Joan Murphy of Liverpool, April Backman (Leonard Zwicker) of Western Head, Marion (Arthur) Clattenburg of Hunt’s Point, her sons Joseph (Linda) of Liverpool and Charles of Western Head, many grandchildren and great grandchildren.
She was predeceased by her husband Charles “Stanley” , her son Owen, her sisters Elsie and infant Florence and her brothers Rupert, Frederick, Warren and Clifton.
Cremation has taken place under the direction of Chandlers’ Funeral Home, Liverpool. A private family memorial service will be held at later date. No flowers by request, donations may be made to Queens General Hospital Foundation or to the Alzheimer’s Society of Nova Scotia. Online condolences may be made to www.chandlersfuneral.com

Offer Condolence for the family of Backman; Annie Elizabeth