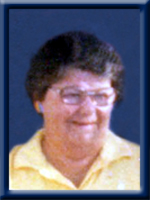 Born in Halifax, NS, she was a daughter of the late Robert “Bob” and Jean (Smiley) MacKinnon.

She is survived by her son Francis Xavier “Frank” (Margaret Anne) of Moose Harbour, her brothers R.K. (Dorothy Anne) MacKinnon, of Liverpool, Jim MacKinnon of LaChute, PQ. Her grandchildren Nicole (Georg) Reuter of Vancouver, BC, Jarret (Mena) Babin of Surrey, BC,  Joel Babin of Moncton, NB, Tommy (Tamara)  Babin of  San Diego, CA, Julie Anne Danylewich of Liverpool, Jennifer (Tom) Fenske of Sudbury, ON.  She will be missed by her 11 great-grandchildren and many nieces and nephews.

She was predeceased by her husband Francis Xavier Sr., her daughter Penelope Shawn, her son Robert Henri and her brother Ian Keith.

Cremation has taken place under the direction of Chandlers’ Funeral Home, Liverpool. A funeral mass will be held Friday, August 30th, 2013 at 11:00 a.m. from St. Gregory’s Catholic Church, Liverpool. Father Keith Billard officiating. Burial will take place in Richibucto, NB at a later date. No flowers by request, donations may be made to the Queens General Hospital, Palliative Care Unit. Online condolences may be made to www.chandlersfuneral.com

Offer Condolence for the family of Babin; Shirley Jean