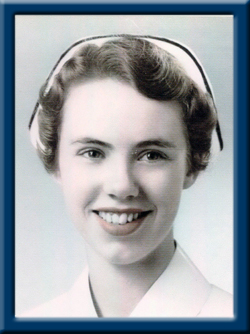 Aulenback – Evelyn W. 81, of Liverpool, Queens Co., passed away in Queens General Hospital Liverpool on Tuesday August 30, 2016.
Born in Liverpool, she was a daughter of the late G. W. Howland and Evelyn (Grierson) White.
Evelyn received all her schooling here in Liverpool, then went into nurse’s training at the Halifax Children’s Hospital, graduating in 1956. After graduation she moved to B.C., and worked in hospitals in Trail, Victoria, and Ocean Falls, B.C. She lived for a time in Prince Rupert, B.C. before coming back to Nova Scotia, in 1969, and worked at Queens General Hospital until 1980, when she made a change and worked in the office of Dr. David Large, in Liverpool from where she retired in 1995. Evelyn was a faithful member of Trinity Anglican Church, Liverpool, serving on the Church Council, ACW, the Altar Guild, church choir and served as an Eucharistic Minister. She was a member of Queens Chapter #34, Liverpool, Crescent Chapter #70, Lockeport and was an Honorary member of Arbutus Chapter #30, Milton, Order of The Eastern Star. She was Worthy Matron of Queens Chapter seven times before taking other offices within the Chapters. She was a Grand Representative of Minnesota in Nova Scotia and Prince Edward Island from 1976 – 1979 and of Nevada from 2007 – 2009. She held various appointments within the Grand Chapter of N.S. & P.E.I. and enjoyed every one of them. Evelyn was a member and Past President of the Queens County Historical Society and one of the first two women to join the then Bowater Mersey Band in 1975, and retired from the band in early 2016. Over the years, she volunteered at Queens Manor and canvassed for several charitable organizations.
She is survived by daughters Beth (Peter) Trobridge, of Ottawa, ON and Daphne (Steven) Rainey, of Vienna, Virginia, brother Douglas (Mary) of Halifax, N.S., sister-in-law Eda White of Pickens, South Carolina and several nieces and nephews.
She was predeceased by her husband Willard (2002), and brother Arthur (2006).
Cremation has taken place under the direction of Chandler’s Funeral Home, Liverpool, where visitation will take place Thursday evening, September 1, 2016 from 7:00 – 9:00 p.m. and where an Order of Eastern Star memorial service will be held at 7:00 p.m. Funeral service will be Friday, September 2, 2016 at 11:00 a.m. in Trinity Anglican Church, Liverpool. Reverend Bonnie Baird officiating, assisted by Reverend Judy Cross. Reception to follow in the church hall.
Family flowers only, donations may be made to Trinity Anglican Church Altar Guild, Queens General Hospital Foundation, Order of Eastern Star Training Awards for Religious Leadership or to a charity of your choice. To share memories or condolences please visit www.chandlersfuneral.com.

Offer Condolence for the family of Aulenback; Evelyn