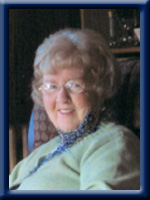 Born in Greenock, Scotland, she was a daughter of the late Thomas and Sara (Donnely) Clark.

Jane immigrated to Canada in 1943 as a war bride. She was an active member of Port Mouton United Baptist Church, singing in the choir and treasurer of the Sunday School.

She is survived by her husband Donald, her daughter Jane of Dartmouth; her son Donald (Mary) of Port Mouton and her grand daughter Tiffany.

She was predeceased by her sister Sara Starkey; brothers Thomas, Joseph and Andrew.

Visitation will be Saturday, August 21st, 2010 from 12:00 until 2:00 p.m. and funeral service will be at 2:00 p.m. both in Chandlers’ Funeral Chapel, Liverpool. Reverend Judy Cross officiating. Burial will be in Peaceful Hill Cemetery, Port Mouton. Family flowers only, donations may be made to Heart and Stroke Foundation of Nova Scotia or to any charity. Online condolences may be made to www.chandlersfuneral.com

Offer Condolence for the family of Atkinson, Jane