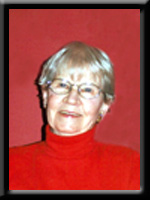 ATKINS – Agnes Cecilia, 89, of Caledonia, Queens County, passed away peacefully, surrounded by her family on Thursday, June 30th, 2011 in Queens General Hospital, Liverpool.
Born in West Caledonia, April 10th, 1922, she was a daughter of the late Burton and Annie (Conway) Canning.
Agnes was devoted to her family and nothing gave her greater pleasure than having the houseful of family and friends. She loved cooking and baking for all of them. She cherished the time spent with her grandchildren as much as they valued their time with her.
She is survived by her children: John (Jane), Tim (Andrea Wergerer), Charlotte (Louis) Wamboldt, David (Debbie) Mary (Chris Morrow), Richard (Martie). Grandchildren: Michelle, Charlie, Justin, Monica, Michael, Connie, Ainsley, Haydn, Luke, Chad, Cory, Maria, Chantelle, Zachary, Cody and Joel. 13 great grandchildren. Sisters: Ann Lauther and Claire Arsenault.
She was predeceased by her husband Richard, son Robert, brothers Laurie, Joseph, Eugene, John, Carl, Bert, Herbert and sisters Barbara, Alice and Mary.
Visitation will be Sunday, July 3rd, 2011 from 7 until 9 p.m. and funeral mass will be Monday, July 4th, 2011 at 2:00 p.m., both in St. Jerome’s Catholic Church, West Caledonia. Father Brian Murphy officiating. Burial will be in St. Jerome’s Catholic Cemetery. Donations may be made to St. Jerome’s Catholic Church. Online condolences may be made to www.chandlersfuneral.com

Offer Condolence for the family of Atkins; Agnes Cecilia