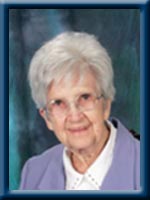 ARTHUR, Amy E.,  94, of Queens Manor, Liverpool, formerly of Milton, passed away peacefully in Queens Manor on Friday, May 28th, 2010.

Born in Milton, she was a daughter of the late  Roland and Margaret (Walker) Mansfield.

Amy was an active member in the Milton Christian Church; Disciples of Christ serving in various capacities as well as being the first lady elder. She loved to sew and to sing  and will be fondly remembered as a loving mother and grandmother to her family.

She is survived by her daughters Ruth (Dr. Stephen) Bedwell of Halifax; Jane (Thomas) Murphy of Kingston, ON. Her sons: Roland (Barbara Churchill) of Thunder Bay, ON and Gordon (Marsha) of Milton.  Seven grandchildren and 9 great grandchildren. Her brothers Roland of Fredericton, NB and Clyde of Toronto, Ont.

She was predeceased by her husband Harold, her son David, sister Ruth and brothers Herman, Lawrence and Roy.

Cremation has taken place under the direction of Chandlers’ Funeral Home, Liverpool. Funeral service will be held Wednesday, June 2nd, 2010 at 2:00 p.m. in Milton Christian Church, Disciples of Christ. Reverend A.R. MacDonald officiating. Burial will be in Milton Community Cemetery. Family flowers only, donations may be made to the Milton Christian Church, Disciples of Christ. Online condolences may be made to www.chandlersfuneral.com.

Offer Condolence for the family of Arthur; Amy Elise