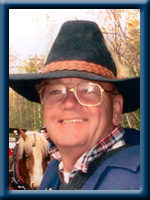 ARMSTRONG – Charles Raymond, 72, of West Caledonia, Queens County, passed away in QEII Health Science Centre, Halifax on April 24th, 2013 with his family by his side.

Born in West Caledonia, he was a son of the late Arthur Guy and Hilda Claire (Conway) Armstrong.

Charles was a Parks Canada employee for 25 years, working grounds maintenance. He was an avid dart player and cook, especially cheese biscuits which will be missed by his entire family.  He enjoyed the outdoors, feeding his ducks and geese, as well as hunting and fishing in his spare time. He also enjoyed woodworking and listening to the old style country music.

He is survived by his wife Patricia (Ritchie) his daughters Cheryl Lynn of Ottawa, ON, Deanna Lee of Ariss, ON and Shawna Sue (Drew) Phillips of Upper Tantallon, eight grandchildren, his sisters Doris Carver of Harmony, Jean Andrews of Hamilton, ON, Rosanna Terpstra of Barrie ON, his brothers James (Mary) of Alliston, ON., Terry (Marge) of Prince Rupert, BC, Robert (Mary) of Bradford, ON.

He was predeceased by his son Shane, his sisters Marilyn Annesty, Helen Thompson and infant sister Carolyn, his brothers Guy Jr., Danny and Gary.

Cremation has taken place under the direction of Chandlers’ Funeral Home, Liverpool. A memorial service will be held Friday, April 26th, 2013 at 4:00 p.m. in St. Jerome’s Catholic Church, West Caledonia. Father Jack Farrell officiating. Burial will be at a later date. Family flowers only, donations may be made to the North Queens Fire Association or to any charity. Online condolences may be made to www.chandlersfuneral.com

Offer Condolence for the family of Armstrong; Charles Raymond