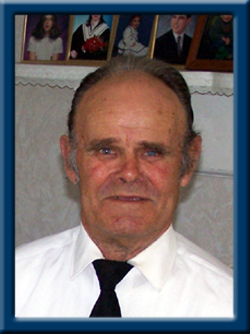 Anthony, Thomas Edward, 91, passed away Friday, September 11 at South Shore Regional Hospital with his family at his side.
Born in Milton on August 5, 1924, he was the son of the late Edward and Margaret Anthony.
As a young child, he lost his mother and went to work doing odd jobs to help support his 4 sisters and brother. He was a stabilizing influence in their lives. He was very fond of his step-mother whom he called “Annie Beattie”.
He was a life-long resident of Milton though in his early years, he served aboard supply ships along the St. Lawrence River and the Great Lakes. He then worked in logging camps, on the dams on the Mersey River and later at Steel & Engine Products for many years. He was a self-taught handyman who enjoyed finding ways to “fix things” for himself and others.
He loved the outdoors and spent much time hunting and trapping, he felt at home in the forest often building a lean-to for overnight shelter. He had a small camp on Ten Mile Lake that served as home on his week-long deer hunting trips in the fall. Later in life he and his wife spent summers travelling with their tent trailer, later settling their trailer at Ponhook Lake. He continued to do odd jobs for those at the lake.
One of his greatest joys in later years was time spent with his grandchildren and great grandchildren. He loved to have them visit.
He is survived by daughter Gail (Harry) Gardner; son Ron (Rose), daughter-in-law Suzan; grandchildren Rebecca (Jonathan), Adrian (Nicole); Lisa (Jeff), Melissa (Darcie); Patricia (Vincent) and Julie (Mike); great grandchildren Ethan, Winston, Elijah, Grace, Taya, Kealey, Amelia, Gabriela, Holly, Colton, Madison, Dakota and Emily.
He was predeceased by his wife, Irene, son, Wayne and an infant daughter.
Following a private family committal, a memorial service will take place at Chandlers Funeral Home, Liverpool at 3:00 PM on Sunday, September 20, 2015. Donations in memory may be made to Rosedale Home for Special Care. Online condolences to the family may be made at www.chandlersfuneral.com.
Special thanks to the staff at Rosedale Home, New Germany for their excellent care and also Dr. Nestle and nursing staff at South Shore Regional Hospital.

Offer Condolence for the family of Anthony; Thomas Edward