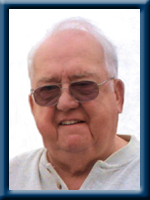 Born in Charleston, Queens County, he was a son of the late Laurence and Dorothy (MacKinnon) Anthony.

For numerous years, Lawrence was owner/manager of South Shore Transport, Liverpool. He was supervisor with Department of Transportation, Liverpool Depot until his retirement in 1996. He enjoyed hunting and sport fishing in his younger years. He enjoyed spending time with family, especially his grandchildren and great-granddaughter who was the “apple of his eye”. He will be missed by his numerous friends with whom he met regularly at the local grocery store parking lot.

He is survived by his daughters Wendy (Stephen) Whynot and Wanda (Brian) Spencer, both of Milton. His sons Sterling (Marilyn) of Bridgewater and Wayne (Judy) of Milton. His grandchildren Jason, Michael and Laurie-Anne and his great-granddaughter Casey. Sisters: Edna Meisner of Bridgewater, Helen Rafuse of New Germany, Roxie (Ingram) Johnson and Myra Knox both of Brooklyn.

He was predeceased by his wife Florence (Thistle) in 1986 and his sister Izilda Lyons.

Cremation has taken place under the direction of Chandlers’ Funeral Home, Liverpool, where a visitation will be held Wednesday, January 4th, 2012 from 7 until 9 p.m. A private family graveside service will be held at a later date in Zion United Cemetery, Payzant Street, Liverpool. No flowers at the request of the family. Donations may be made to the Canadian Cancer Society. Online condolences may be made to www.chandlersfuneral.com

Offer Condolence for the family of Anthony; Lawrence Clifford