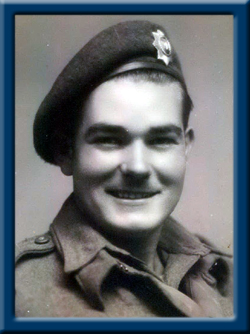 ANTHONY – Allison Theodore, 92, of Liverpool, Queens County, passed away suddenly at home on Saturday, July 30, 2016.
Born in Milton, he was a son of the late Thomas and Lottie (Whynot) Anthony.
Allison left school at the age of 14 to work in the woods with his father and by the age of 17, he was working for Mersey Paper Company. When Allison turned 19, he enlisted in the Royal Canadian Army Corps and was sent overseas to England then to Italy where he was posted on the front lines. He was wounded twice and taken prisoner of war on December 26, 1944. He was forced to work on the railway lines doing repairs. He returned home on February 9th, 1946 and went back to work with the Mersey Paper Company where he retired after 33 years.
Allison enjoyed working on his property especially the pond., hunting and fishing, telling stories and playing cards. He also enjoyed woodworking making guitars and chairs. He played guitar and the mouth organ and loved singing.
He is survived by his daughter Joanne (Philip) Young of Halifax and his son Tony (Janet) of Halifax. Seven grandchildren and three great grandchildren. His brother Wilson of Liverpool.
Allison was predeceased by his wife Pearl, his son Victor and an infant daughter Patricia Lynn as well as a number of sisters and brothers.
Cremation has taken place under the direction of Chandlers’ Funeral Home, Liverpool. Visitation will be held from 1:00 until 2:00 p.m. on Sunday, August 7, 2016 with a Legion memorial service being held at 2:00 p.m. immediately followed by a funeral service all in Chandlers’ Funeral Chapel, Liverpool. Reception to follow. A private family committal will take place at a later time. No flowers by request, donations may be made to the Canadian cancer Society or to a charity of your choice. Online condolences may be made to www.chandlersfuneral.com

Offer Condolence for the family of Anthony; Allison Theodore