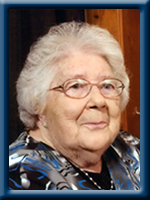 AMIRAULT – Mary Louise “Marion” 86, of Liverpool, passed away peacefully in Queens General Hospital, Liverpool on Thursday, February 5, 2015.
Born in Liverpool, she was a daughter of the late Reginald and Jessie (Whynot) Johnson.
Marion was co owner of Queens Furniture along with her late husband Earle. She was a member of St. Gregory’s Catholic Church and the Ladies Auxiliary. She was a former Lioness for over 20 years. Marion enjoyed tole painting, trout fishing with her husband and bingo, but, above all, Marion loved spending time with her family.
She is survived by her daughters Pat (Doug) Lohnes, Yvonne Clarkin, Tinie (Giffy) Fralic, all of Brooklyn, Angie (Walter) Croft of Western Head, sons Byron (Janet) of Middle Sackville, Bernard (Stephanie) of Brooklyn, Chris (Bev) of Yarmouth, Stephen (Vicki) of Sandy Cove, 18 grandchildren and 7 great grandchildren, sisters Cassie (Ted) Edmonds of Bridgewater, Janet MacNutt of Milton, brother Sonny (Gloria) of Kingston, NS.
She was predeceased by her husband Earle J., son Glenn, grandsons Timothy and Jonathan, sister Helen Wamboldt.
Funeral service will be Monday, February 9, 2015 at 11:00 a.m. in St. Gregory’s Catholic Church, Liverpool. Father Keith Billard officiating. Burial will be in St. Gregory’s Catholic Cemetery, College Street, Liverpool. Family flowers only, donations may be made to the Canadian Cancer Society or to St. Gregory’s Catholic Church. Online condolences may be made to www.chandlersfuneral.com

Offer Condolence for the family of Amirault; Mary Louise “Marion”