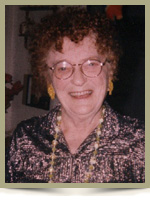 Born in Liverpool in 1909, she was the daughter of the late George Henry and Susan (Ellis) Allan.

Marion was a highly able and intelligent businessperson and investor. During her working career, she worked for some of Liverpool’s notables during the first half of the twentieth century. She started her working life in New Hampshire, USA working in the Dole Company, and at Draper and Company (Bobbin Mills where Dan River Cottons were produced) as Secretary to the President. In Liverpool and area, she worked in the office of the North American Fishery, for Lawyer Ross Byrne, Optometrist Dr. A. Shane, Ross Putman, Jewelery, Henry Leslie, Jewelery, Grocer D. D. Innis, and Grocer Herbert More. She purchased West End Grocery and made it into a very profitable business for 14 years until 1969.

She was the last surviving member of her family.

As per Marion’s wishes, a graveside funeral service will be held Friday, June 3rd at 11:00 a.m. in Trinity Anglican Cemetery, Bog Road, Rev. Donald Lawton officiating. Family flowers only. Donations may be made to the Queens General Hospital Foundation, Box 528, Liverpool, NS B0T 1K0 or a charity of your choice. Online condolences may be made at: www.chandlersfuneral.com

Offer Condolence for the family of Allison; Marion Mae