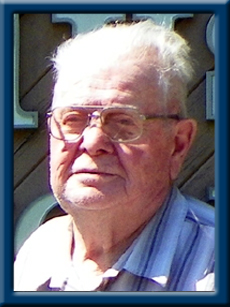 ACKER – Wilfred Mervyn, 88, of Caledonia, Queens County, passed away peacefully in Queens General Hospital, Liverpool on Monday, February 20, 2017.
Born in Hunter’s Lodge, Annapolis Co., he was a son of the late Frederick and Ida (Goucher) Acker.
Wilfred was a long-time truck driver for Bowater Mersey Paper Company Limited for over 35 years having the unique distinction of being accident free during his driving career. He enjoyed restoring antique bikes and taking care of his GMC trucks. A man of few words, Wilfred was known to be a thoughtful person with a great sense of humor who loved to spend time with his family and friends.
He is survived by his wife of 58 years, Shirley (McLean); his daughter Julianne Acker-Verney (Tim Verney) of Halifax; his son James of West Northfield ; his sister Florence “Effie” Ball of Bridgewater as well as nieces and nephews.
He was predeceased by his sisters Margaret Hoar, Olive Mansfield and infant sister Kathleen and his brothers Denis and L. Ellot.
Cremation has taken place under the direction of Chandlers’ Funeral Home, Liverpool. At Wilfred’s request, a graveside memorial service will be held at a later date in Highland View Cemetery, Caledonia. No flowers. Donations may be made to the charity of your choice. Online condolences may be made to www.chandlersfuneral.com

Offer Condolence for the family of Acker; Wilfred Mervyn